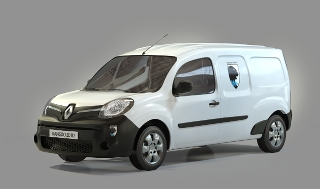 The van is the result of a collaboration between Symbio FCell, a leading designer and manufacturer of fuel cell systems and range extenders, and its UK sales and deployment support partner, Arcola Energy UK, an engineering services business.

This fuel cell electric light duty vehicle is part of Aberdeen City Council’s Hydrogen Transport Economy (HyTrEc) project that aims to improve access and advance the adoption of hydrogen as an alternative energy across the North Sea Region.

Two electric Renault Kangoo ZE-H2 vans provided by Symbio FCell are being integrated into the Council’s fleet and use hydrogen fuel cell range extenders to address the range limitation issues of battery powered electric vehicles, more than doubling the driving range of an electric only van whilst still providing low emission advantages.

Other benefits of Symbio FCell’s Fuel Cell Range Extenders the ability to be added without any structural modification to the vehicle and functionality to dismount the kit and re-mount in a new vehicle if required.

A range of operational data is being collected throughout the HyTrEc project, such as fuel consumption, routes driven and vehicle location.  This will be used to analyse the vehicle performance. The project will identify and address structural impediments constraining the development, access and adoption of this alternative fuel in urban and rural settings.

Ben Todd, managing director at Arcola Energy, commented: “As they can be powered by hydrogen derived from renewable energy, the power provided by fuel cells can be truly zero carbon. But even where the hydrogen is generated from non-renewable sources, there can be significant environmental as well as practical and commercial benefits.