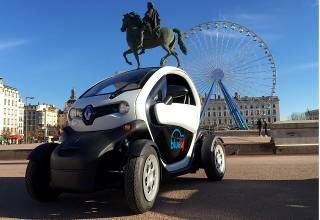 In total, 30 models have been added already alongside Bolloré's Bluecar, with plans to add 110 Renault Twizys to the Bluely fleet as well as the Bluecub (Bordeaux) fleets by the end of 2015.

To enable its inclusion in the scheme, the Renault Twizy now features a device developed by Bolloré for connecting to the subscription and call-centre system of the Lyon region car-sharing service. In addition, the usual Twizy charging cable is replaced by a female connector, taking the cable from the Bluely charging terminal – the same as for the Bluecar. The Twizy Bluely’s charging time is up to three and a half hours for a full charge.

Previous: Australia kicks off plans for ‘Hydrogen Highway’
Next: Milestone Renault Twizy goes to the municipality of Florence, Italy