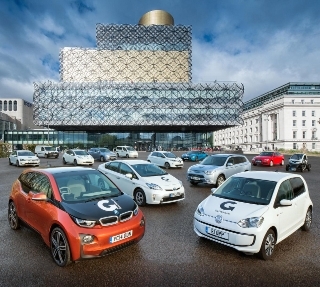 According to the latest research from the Go Ultra Low campaign, 8,573 passenger cars with CO2 emissions lower than 75g/km were registered in the first quarter of this year, a year-on-year increase of 386%. Fleets have led the way, accounting for more than 68% of the market, or 6,045 new models.

And fleet decision-makers have the chance to assess some of the very latest models for themselves at the Fleet Show at Silverstone, which is being sponsored by Barclaycard Fuel+ in association with TMC, with four of the country’s top five most popular cars available at the event.

Leading the way are the latest ultra-low emission models from BMW, which claimed two of the top five places in the league table of most popular models, with the i3 and i8. BMW’s highly acclaimed i range also comes with a comprehensive line-up of support packages, including access to charging networks, home charging solutions and the use of conventionally-powered cars for long trips.

The country’s second most popular model, according to the Go Ultra Low figures, is the Nissan LEAF, the world’s biggest selling electric vehicle. Offering rapid charging to 80% capacity in just 30 minutes, this C-segment hatchback has a range of up to 124 miles from a single charge of its pure electric powerplant.

Also on show will be the fourth most popular model, the Renault ZOE, currently the most affordable EV on the market. Now available with the option to purchase the battery instead of leasing it, the ZOE has a range of 130 miles and, like the LEAF, offers 30-minute rapid charging.

Other ULEVs available at sell-out Silverstone on 12 May will be the Volvo V60 Plug-in Hybrid which combines a diesel engine and an electric motor to mix strong performance CO2 emissions of just 48g/km.

Meanwhile at the luxury end of the market, Californian all-electric luxury car manufacturer, Tesla, will have its Model S, which offers a range of up to 310 miles on the New European Driving Cycle (NEDC), available for test driving.

“These latest sales figures from Go Ultra Low show that, in today’s extremely emissions-conscious fleet market, ULEVs are of increasing importance. Fleet buyers are leading the way in a surge of ULEV registrations in the first quarter of 2015, and this is a trend we expect to see continued throughout the year.

“Some of the very latest ultra-low emission models will be available at Silverstone this year so that fleet decision-makers will have the perfect opportunity to assess them in a variety of different driving conditions,” said Jerry Ramsdale, Show director and publisher of Fleet World.

The Go Ultra Low campaign, the first of its kind, which brings together a consortium of seven leading vehicle manufacturers (Audi, BMW, Mitsubishi, Nissan, Renault, Toyota and Volkswagen), the Office for Low Emission Vehicles and the SMMT, will be running a workshop at the Fleet Show discussing the benefits for fleet operators of including ULEVS on their fleet policy lists.

This year’s Show has already attracted a record-breaking 25 vehicle manufacturers, including several who have never participated in the event before, such as Ford Motor Company and Fiat Chrysler Automobiles.

They will be displaying the very latest in powertrain developments, including the most recent low-emission, tax-busting conventional ICE (Internal Combustion Engine) advances as well as the newest hybrid and electric technology.

Show visitors will again be able to experience test driving on three circuits of the world-famous Silverstone Grand Prix venue, plus off-road driving on the 4×4 course.

However, as with other Fleet Shows, it isn’t simply about test driving. A visit to Silverstone in May provides an appealing mix of education, networking and static displays that guarantee a day out of the office will not be wasted.

Back again by popular demand are the highly successful fleet training sessions, first introduced last year, which involve a series of interactive workshops run by practising fleet managers. The 30-minute workshops will tackle key fleet topics and are the perfect forum to find out something new in fleet management.

Meanwhile, halls 1-3 of the Silverstone Wing will again play host to a wide-ranging fleet exhibition boasting a diverse array of exhibitors. This area will also provide Show visitors with the chance to hold face-to-face meetings and socially interact with exhibitors and other visitors alike.