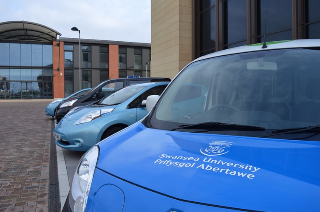 The University’s fleet, comprising two Renault Kangoo Z.E. vans, two Nissan LEAFs and an e-NV200s are used by branches of the University, such as Information Services and Systems, the College of Engineering, the student letting service (SAS), and the SPECIFIC project which is investigating energy storage and generation in buildings.

Nigel Morris, from the information services and systems team, said: “The new fleet has been a big success, cutting our carbon emissions by 4.5 metric tons already. The vehicles don’t damage air quality either, as they don’t produce the gases that are generated by diesel engines in particular. With the financial savings too, they’re proving to be an all-round winner, which is why we already have two more cars on order for January.”

Miles Willis, Project Director of the College of Engineering Bay Campus Team, who has been using one of the electric cars, added: “They’re very nice to drive and just like normal cars.  It’s useful for going between campuses, especially when I need to carry extras with me. They charge up in about 90 minutes, so I can leave it charging while I’m in a meeting. They’ve also been great advertising for Swansea Uni as they’ve attracted a lot of interest.”