Tesco has introduced a new electric delivery fleet in London as part of plans to go fully electric by 2028. 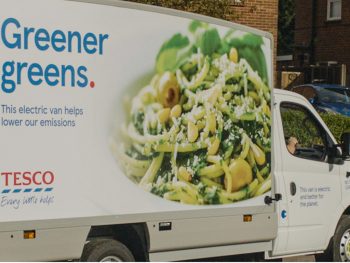 One of a number of measures in its target to hit net zero in the UK by 2035, Tesco’s fleet of 30 electric delivery vans has hit the roads in Greater London this month. It’s also revealed plans for a fully electric home delivery fleet by 2028, significantly beating the Government’s expected announcement this week on phasing out new petrol and diesel car and van sales by 2030.

Tesco is also continuing its work with Pod Point to will install 2,400 charging points across 600 stores in the UK; this summer saw it reach the milestone of the 200th charger installation and 400 stores are due to be fitted with the chargers by the end of 2020. By the time the programme has concluded, Tesco says it will have boosted the UK’s electric charging network by 14%.

The new initiatives, which also include solar farms and instore solar panels, will put the business on course for net zero in its UK operations by 2035; 15 years ahead of the UK government’s deadlines. Tesco is also working collaboratively with suppliers to support them to report on and make their own carbon reduction commitments, in line with the Paris Agreement goals.

Jason Tarry, CEO of Tesco UK and ROI, said: “In 12 months’ time, the UK will host the most critical climate change summit of the decade, known as COP26. At Tesco we want to play our part. That’s why we’ve brought forward our ambition to reach net zero in our UK operations by 15 years and made a series of new commitments to help us achieve that target, including reaching a new milestone today in our journey to using 100% renewable energy by 2030.”