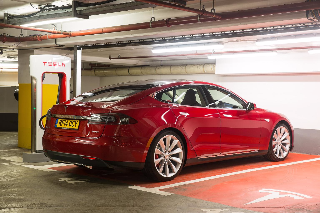 Added during the Version 7.1 software update, the Summon function enables the Model S and Model X to drive autonomously, in a straight line for up to almost 12 metres, though it’s recommended that this Beta version is only tried on private land.

Drivers can control their cars using a smartphone or the keyfob, pressing the boot release button to reverse into a space or the ‘frunk’ (front trunk) button to drive forwards into it, then pressing the opposite button to summon it back out. Garage doors can be opened and closed through the HomeLink system, if required, and the car automatically selects park once the manoeuvre is complete.

Version 7.1 also adds the ability to park in perpendicular spaces, controlling the throttle and brakes as well as the steering, on top of the parallel parking function introduced during the previous update.

In its blog, Tesla said: “Eventually, your Tesla will be able to drive anywhere across the country to meet you, charging itself along the way. It will synch with your calendar to know exactly when to arrive.

“The release of Tesla Version 7.1 software is the next step toward developing fully autonomous driving capabilities and delivering them through over-the-air software updates, keeping our customers at the forefront of driving technology in the years ahead.”