By Alex Grant / 7 years ago / International News / No Comments

Electric vehicle manufacturer Tesla expects the UK to be one of its top five largest global markets, and the biggest in Europe, with long-term plans to build an R&D centre in the British Isles, according to CEO and co-founder Elon Musk. 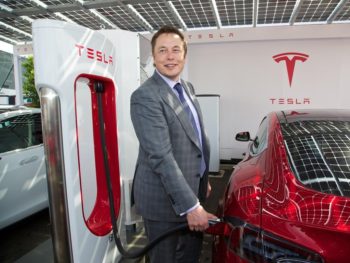 Speaking at the official handover of the first five right hand drive Model S electric luxury cars in London, Musk said the company was continuing to expand its final assembly plant in Tilburg, in the Netherlands, where cars are prepared for European customers following production in California.

‘Our hope for Europe is that we sell a comparable number of cars to we do in America, or a similar number at least, and we expect to increase our activities in Europe quite a bit,’ he said. ‘One of the things we’re in the process of doing is expanding our final assembly operations in Tilburg, and we also expect to establish an R&D centre in the UK next year or the year after.’

Early signs are strong for the UK market, which already has a four-month waiting list for the Model S. Tesla has confirmed two additional service centres in Birmingham and Manchester, and expansion of the free-for-life Supercharger network of charging points will cover southern Britain by the end of the year, and all of the British Isles by the end of 2015, he said.

The Model S, which has an all-electric range of 312 miles and is priced from £49,900 in the UK, sold 22,500 units during 2013, outselling the Chevrolet Volt in the United States, and has topped Norway’s monthly car sales figures several times since it launched, helped by large government incentives.

Increased infrastructure will support expansion of the range – a luxury SUV, called the Model X, is scheduled to arrive at the end of 2015 with initial interest already outpacing the Model S, and a compact executive electric car priced from £25,000 will launch in 2017.