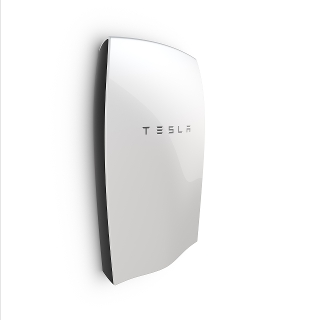 According to Telsa, one third of all the fossil fuels consumed in the United States is used in transportation and another third goes to electricity production. The US electric power sector alone produces over 2,000 million metric tons of CO2, which is the equivalent of burning 225 billion gallons of gas. The US Environmental Protection Agency estimates it would require 1.6 billion acres of US forest to negate the environmental damage.

The company claims that if renewable energy sources were used for our power consumption, the top 50% of the dirtiest power generation resources could retire early and the have a cleaner, smaller, and more resilient energy grid.

The Tesla Powerwall is a rechargeable lithium-ion battery designed to store energy at a residential level for load shifting, backup power and self-consumption of solar power generation. The Powerwall consists of Tesla’s lithium-ion battery pack, liquid thermal control system and software that receives dispatch commands from a solar inverter.

The unit mounts on a wall and is integrated with the local grid to harness excess power and give customers the flexibility to draw energy from their own reserve.