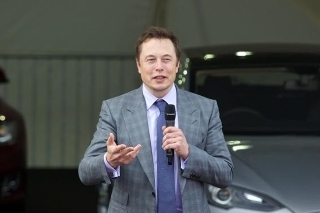 Speaking to investors at the carmakers’ annual meeting, Musk said he’s looking at the latest iteration of the Model X every week.

He added: “The Model X may arguably be a better SUV than the Model S is a sedan.  We want to make sure that some of the key features of the Model X, particularly the Falcon Wing door and the way that the second row seats are done and a few other things that people aren’t aware of, are done just right. It's got to be a genuine improvement in utility and aesthetics.”

Musk added that he is also testing the company's prototype Autopilot feature, which can be used at highway speeds under certain conditions and will start driver tests around the end of this month.

The system, which consists of a forward radar, a forward camera, and 360 degree ultrasonics that go out to about 5m or roughly 16 feet around the car, will be billed as a driver assistance feature, with the driver needing to be ready to take over if needed.