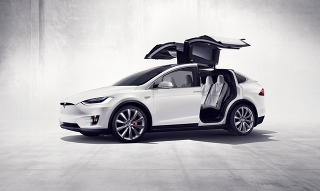 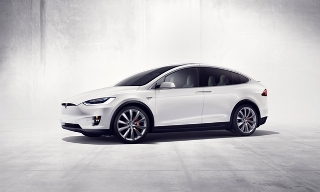 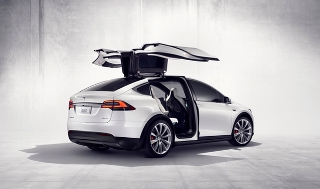 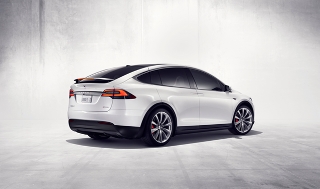 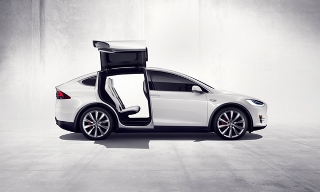 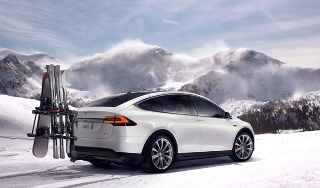 The new model follows in the footsteps of the prototype Model X unveiled in 2013 by offering ‘Falcon Wing’ doors that open upwards instead of outwards. The doors only require 30cm of space on the side of the vehicle and are fitted with sensors to avoid contact with obstacles. The driver’s door also operates automatically.

The electric powertrain uses the same dual motor set-up as in the Model S, with the front motor delivering 255bhp and the rear motor offering 496bhp. Combined output is 751bhp with 713lb.ft of torque. As a result the Model X offers a 0-60 time of 3.2 seconds in ‘Ludicrous’ function and hits a top speed of 155mph.

The SUV also shares its platform with the Model S, using a 90kWh floor-mounted battery, which provides a driving range of 250 miles on a single charge.

An active spoiler is fitted at the rear and brings three positions, with the low-speed setting positioned for optimum driver visibility while at higher speeds the setting brings improved efficiency.

Technology includes a 17-speaker audio set-up and 17-inch centre touchscreen. The Model X also features a forward-looking camera, radar, and 360 degree sonar sensors to enable advanced autopilot features. Tesla added that its usual over-the-air software updates will be used on features such as Autosteer and Autopark, “bringing the Model X ever closer to autonomous operation”.

Deliveries have already started in the US, with the first five models delivered last night. Full pricing details aren't available but Tesla said the US Signature Special build starts at around $130,000. A spokesperson added that pricing will be at around $5000 more than Model S due to the increased size but it hasn't been announced which battery sizes will be available apart from the 90kwh.

The spokesperson added that there are no specific timelines for arrivals in the UK but expect first deliveries in 2016.