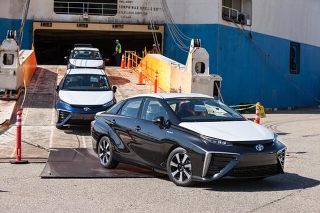 Already an area with a high take-up of plug-in and hybrid vehicles, the state is expected to be one of the biggest global markets for hydrogen fuel cells. Toyota has appointed eight dealers to support early Mirai customers.

With limited volumes, Toyota said it will select eligible customers to receive the cars. Requests made through the website will be followed by a conversation with a representative from the manufacturer, to discuss ownership.

The Mirai is priced at $57,500 in California, plus an $835 destination fee, and it launches with a ‘Trailblazer’ programme with support packages for finance, lease or purchase orders completed before the end of the year.

Model year 2016 cars will also include complimentary fuel (up to $15,000), Safety Connect and Entune connected services including a hydrogen station finder app and 24/7 customer support for the first three years of ownership.