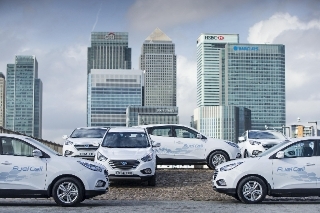 Announced alongside funding of £7.5m to boost the uptake for electric two-wheelers, the investment in the UK’s hydrogen infrastructure will be used to establish an initial network of 12 hydrogen refuelling stations, including new stations built in Brentford and Croydon and a new mobile station that will be used across the south of England, as well as upgrades to existing hydrogen demonstrator stations. This represents a significant step in enabling the use of hydrogen fuel cell vehicles in the UK.

The news was greeted by Tony Whitehorn, president & CEO at Hyundai Motor UK, who said: “The additional stations and package of upgrades will make Fuel Cell vehicles a viable option for more fleet and private customers.”

“As the first global carmaker to begin UK delivers of fuel cell passenger cars in 2014, Hyundai welcomes this investment which will support the rollout of hydrogen technology to additional customers.”