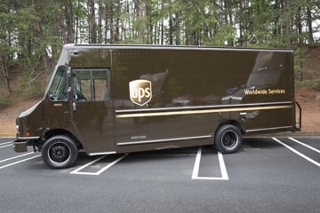 In the UK, a range-extended electric delivery van has just begun a 12-month trial in Barking, East London. The drivetrain, developed with TEVVA Motors, uses a small diesel engine to recharge the batteries, potentially adding several hundred miles of range to the 45-60 miles available from the electric drive.

The truck is geo-fenced to operate in urban areas where it can make a maximum reduction in air pollution, and will cover 60-90 miles per day. Its range-extender is programmed to operate on routes such as motorways, where local pollution is less of an issue. UPS said the trial will assess whether this can be rolled out further.

In the first half of 2016, UPS will deploy 125 hybrid delivery trucks in the United States, which it says will offer four times the fuel economy of a petrol vehicle. Purchased this month, the trucks use technology from Workhorse Group Inc., and will be used in Arizona, Nevada, Mississippi, Alabama, Georgia and Florida.