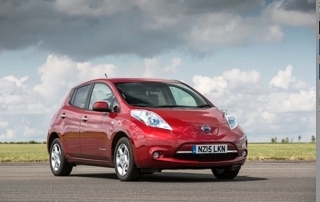 A new study by the Centre for Solar Energy and Hydrogen Research in Germany has found that around 320,000 electric cars were registered last year, with the Nissan LEAF, Tesla Model S and Mitsubishi Outlander PHEV leading the way.

The US saw one of the highest absolute growth rates with another 117,000 EVs registered in 2014, bringing the total to around 290,000, a 69% increase. The USA continued to claim the top spot for overall EV take-up.

Registrations in China also increased, with nearly 54,000 more electric vehicles bought in 2014, bringing the count up to just short of 100,000, an increase of around 120%. China's fleet puts it third in the league table, just behind Japan, where the 100,000 mark in electric cars has been exceeded, but at a relatively low growth rate of 45%.

The researchers added that market incentives in these countries have helped push up registrations.

In contrast, a lack of incentives has resulted in Germany taking just seventh place in absolute numbers (around 29,600 cars) and eighth in new registrations (around 11,700).

As in preceding years, Norway remains a pioneer this trend. The number of electric cars there rose 113% to a total of 43,400. Some 2.64 million automobiles are registered in the Scandinavian country, just over 1.6% – making it a world leader in percentage share.

Previous: "Range anxiety may be an over-stated concern” finds US study
Next: Australia kicks off plans for ‘Hydrogen Highway’