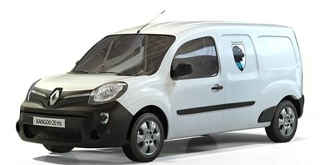 The agreement will expand deployment of the firms’ Renault Kangoo hydrogen fuel cell hybrid vans in the UK and will provide fleets with a complete solution including preparation, insurance, site approvals, vehicle registration and staff training.

Showcased last month at LCV2015, the Renault Kangoo ZE-H2 electric van with Fuel Cell Range Extender is the result of a collaboration between Symbio FCell, a leading designer and manufacturer of fuel cell systems and range extenders, and its UK sales and deployment support partner, Arcola Energy UK, an engineering services business.

The vehicle is now in series production and offers a range of over 200 miles, more than double the range of the electric-only van.  Other benefits include a hydrogen refuelling time of less than three minutes along with the ability to plug-in whenever possible.

In the UK the vans are fully VCA approved and have National Small Series Type Approval (NSSTA). As a modified version of the standard Kangoo ZE, the vans are fully supported by Renault dealerships.  An EU-wide support hotline is provided to customers.