Volkswagen has revealed its ID. Space Vizzion concept car, giving an insight into the brand’s forthcoming electric estate car, due 2021. 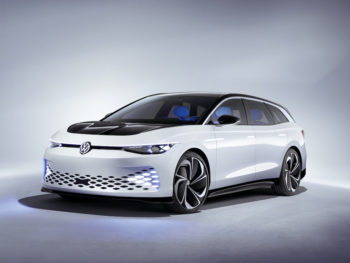 Marking the seventh concept car of the ID. family, the ID. Space Vizzion is intended to marry up the design of a Gran Turismo with the space of an SUV. The series production version will be presented at the end of 2021, and launched in different variations in Europe, North America and China.

The concept includes a rear-wheel drive version featuring a 275hp motor and a possible four-wheel drive version that boosts total horsepower to 340hp thanks to an additional  motor on the front axle. The latter would also offer a 0-100km/h (0-62mph) time of 5.4 seconds.

The 82kWh battery pack brings a 590km (367-mile) WLTP rated range and would be integrated into the floor. Combined with a compact design for the electric drive, the interior space would be more on a par with a long wheelbase premium saloon than a mid-range model, according to the brand.

Other sustainable highlights of the concept include materials such as the new AppleSkin – an artificial leather containing an amount of residual material from apple juice production -while chrome is replaced by a chrome-like paint finish for the interior.

Onboard tech includes an augmented reality head-up-display as well as a 15.6-inch touchscreen which appears to hover in mid-air. The driver also receives key information intuitively from the ID. Light – an interactive light strip between the A-pillars.