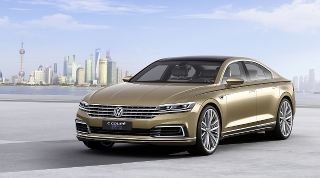 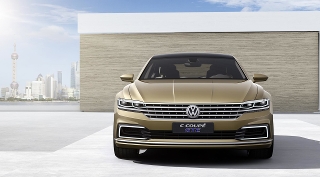 Over 5m in length, the concept is aimed at the Chinese market and, according to reports, will be on sale there in production form near the end of next year, based on the VW’s MLB platform for vehicles with longitudinal engine orientation.

The plug-in hybrid drive system comprises a 207bhp turbocharged petrol direct-injection engine (TSI) with four cylinders married up with an eight-speed automatic gearbox, a 122bhp electric motor integrated in the gearbox module and a lithium-ion battery integrated at the rear, which can be charged while driving or while parked. Total system power is 242bhp and torque of 369lb.ft.

In zero-emission mode, the C Coupé GTE can also be driven up to a speed of 81mph for a range of 31 miles. Official NEDC combined fuel consumption is 123mpg, with CO2 emissions of 55g/km.

Previous: Sales of ULEVs reach all-time high with many top models at record-breaking Fleet Show
Next: LCV2015 open for registration