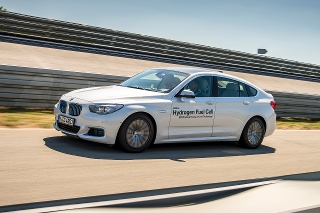 The two companies have been working together since signing a collaborative agreement in 2013 to co-develop fuel cells, lightweight materials, next-generation batteries and a sports car, and the first prototype was unveiled this week.

This is based on a 5 Series Gran Turismo, driven by a 241bhp electric motor derived from the brand’s plug-in hybrid and electric vehicles and with a small high-voltage battery on board. The fuel cell stack is based on Toyota’s technology and supplies electricity to drive the motor, produced using a reaction between hydrogen and oxygen similar to reverse electrolysis.

BMW is claiming a range of over 300 miles from the hydrogen tank stored in the transmission tunnel, with a refuelling time of less than five minutes and water vapour as the only exhaust emission. It marks a significant change since the manufacturer’s last hydrogen-fuelled vehicles, which burned the gas in an engine instead of using it to generate electricity.