The UK’s first ultra fast charging station has opened in Sunderland, bringing a charging capacity of up to 350kW. 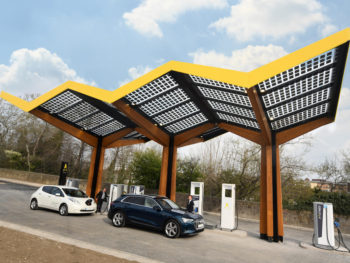 Initially, charging at the station in Sunderland will be free

Developed by technology group ABB and managed by Dutch company Fastned, the ultra-fast charging station offers four 50kW fast chargers and two 175kW fast chargers that are already enabled for 350kW charging. This will help ready the network for the next generation of electric vehicles with high-capacity batteries.

The fast charging station, which uses solar panels to bring up to 100% renewable energy, will initially be available free of charge before the payment system is activated, based on a pay-as-you-go per kWh charge and offering payment via charge card, credit or debit card and Apple or Android Pay. The Fastned app will go live later this year, offering automatic charging.

The ultra fast charging station is part of the Go Ultra Low NE programme, which is owned and led by North East Joint Transport Committee and funded by the European Regional Development Fund (ERDF) and the Office for Low Emission Vehicles (OLEV), and forms part of Fastned’s plans to build a European network of fast and ultra fast charging stations.

The new stations go live as a number of networks look to deploy 350kW chargers. This includes plans by the Ionity consortium of manufacturers, including BMW Group, Daimler, Ford Motor Company and the Volkswagen Group, to launch a network of 400 350kW stations along major European routes, including in the UK.

Last month saw Fastned announced that it will build and operate five fast charging hubs across the North East, following a successful bid to the North East Joined Transport Committee. the hubs will initially house two 50 kW fast chargers, and will be built in Gateshead, Bluth, Whitley Bay, Washington, and Kingston Park.

Councillor Martin Gannon, Chair of the Joint North East Transport Committee, said of the new charging stations: “This is a tremendous asset for the North East. With another fast charging station under construction and five more smaller stations planned, we are making it easier for motorists who already drive electric vehicles and those who want to go green and make the switch to a more sustainable form of transport.”