The AA has successfully trialled a new solution that could be used in the future to provide refuelling back-up for drivers of hydrogen cars. 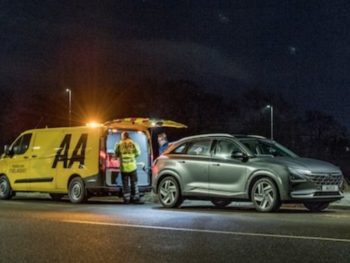 Announced late last year, the development is intended to help spur more drivers make the switch to hydrogen FCEVs despite the current lack of infrastructure. It features a mini hydrogen dispenser in a Fuel Assist vehicle, providing a refuelling back-up for drivers caught short.

Said to be one of the world’s first Fuel Assist services for alternative fuels, the solution has now been trialled to provide support for a hydrogen-powered 1,000-mile journey across the UK in a Hyundai Nexo. Supported by a number of companies, the FCEV drove from London to Edinburgh, recreating a historic route completed by car enthusiasts in the early days of motoring but with new detours for hydrogen stations.

The mini hydrogen dispenser in the AA Fuel Assist van was developed by Fuel Cell Systems and creates an emergency fill option equivalent to a ‘jerry can’.

George Flinton, AA Patrol of the Year, said: “The mini hydrogen dispenser was fitted into one of our Fuel Assist vans as part of a technical development project in collaboration with Fuel Cell Systems Ltd, allowing the safe refuelling of fuel cell electric vehicles at the roadside.

“The journey was well planned so we didn’t expect to use the dispenser for an emergency re-fuel, but as the snow created delays we did ultimately need to bring it into use. It only took a matter of minutes to set up and fill, which provided 35-40 miles of range. This was more than enough to get us back to the nearest filling station, but it does highlight the need for more refuelling infrastructure if hydrogen is to take off in the UK.”

The project builds on the AA’s work to support electric vehicle drivers – patrols are already issued with Polar Charging Cards so that they can help members who may run of charge – and could be introduced in the future.

A spokesperson for the AA added: “If the pilot is successful then operational dates would depend on the uptake of hydrogen fuel cell vehicles to ascertain the levels of demand.”