Toyota has reimagined its Yaris for its fourth-generation iteration, introducing a new platform and hybrid technology as well as a bold new design. 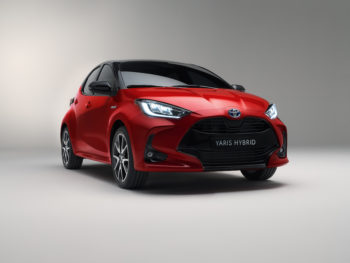 Launching in autumn 2020, the fourth-generation Yaris marks the first application of the Toyota New Global Architecture (TNGA) programme compact cars with the new GA-B platform. Described as a ‘Condensed and Agile’ format, this makes the new Yaris shorter (by 5mm), wider (60mm) and lower (40mm) than the current model while bearing a 50mm longer wheelbase, intended to ensure its agility in urban conditions while maintaining interior space, helped by intelligent packaging.

The new Yaris also heralds the first use of the new TNGA three-cylinder, fourth-generation hybrid system. The model received its first hybrid powertrain in 2012 – since when more than 500,000 have been sold in Europe – and the latest fourth-generation version has been developed to be efficient with an improved response.

The 1.5 Hybrid Dynamic Force system is directly derived from the larger, 2.0- and 2.5-litre systems that were introduced in the new Corolla, RAV4 and Camry models, and has been optimised for weight, package and efficiency. It features the new 1.5 Dynamic Force three-cylinder Atkinson cycle petrol engine with variable valve-timing – the unit is claimed to have the world’s fastest combustion speed – and achieves a 40% thermal efficiency, higher than typical diesel engines, helping bring a 15% increase in combined power and over a 20% increase in fuel efficiency.

The system also adopts a new lithium-ion hybrid battery with an increase in output that enables quicker vehicle acceleration and is also 27% lighter than the nickel-metal hydride battery it replaces.

The new Yaris will also be available with 1.5 and 1.0-litre three-cylinder petrol engines in selected markets.

The new platform also enables revisions to improving driving dynamics. The driver’s seat is set lower and further back (+60 mm compared to the current Yaris) towards the centre of the car, helping to reduce the vehicle’s centre of gravity, while the driving position is also heightened by having the steering wheel set closer to the driver, with a six-degree increase in the tilt angle. Driving dynamics are aided by a 15mm lower centre of gravity than on the current model.

A new suspension set-up has been introduced to further improve the new Yaris’ dynamic qualities, reducing body roll in cornering and increasing agility, while the GA-B platform has allowed for a significant increase in body rigidity, enhancing vehicle stability and ride comfort, together with lower noise and vibration levels.

The interior features the model’s first-ever soft-touch instrument panel while the cockpit design has been developed around the concept of ‘hands on the wheel, eyes on the road’ and brings driver information from a central Toyota Touch screen, a TFT multi-information display in the instrument binnacle and a 10-inch colour head-up display. It also features a smaller steering wheel for better visibility, supporting the ‘eyes on the road, hands on the wheel’ concept.

Other onboard equipment available includes a wireless charger, a heated steering wheel and special ambient cabin lighting around the driver’s cockpit.

The Yaris’s new platform also enables advances in active and passive systems – said to create the world’s safest compact car. It’s been developed with the expectation of achieving best occupant protection in the forthcoming stricter standards for 2020 – the Yaris claimed to be the first car in the compact segment to introduce a centre airbag

Standard driver assistance systems include full speed-range intelligent adaptive cruise control and lane trace assist system as seen on recently launched Toyota models such as the Corolla – with more in-depth safety equipment data and other specifications due closer to its on-sale date in mid-2020.