Audi has launched a premium charging service for its E-Tron electric SUV ahead of the model’s official launch next week. 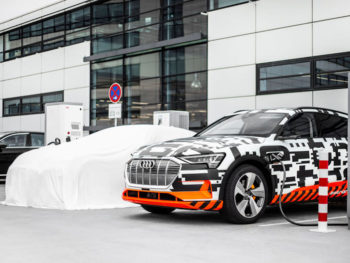 The carmaker has already outlined that the model offers a range of 250 miles and can regain most of that range in around 30 minutes using a high-power 150kW on-board charger. The first compatible units are set to be installed in the UK within months as part of the carmaker-backed Ionity infrastructure project which will put 400 ultra-fast charging stations along Europe’s major routes.

Ahead of the model’s official launch on 17 September, Audi has announced the launch of the E-Tron Charging service, which will offer access to 72,000 charging points from 220 providers – equating to around 80% of all public charging stations – accessible using one card in Europe, featuring coverage in 16 EU markets, including the UK. This will be ramped up with a further eight markets in Eastern Europe due to follow in a few months’ time. Chargepoints – which can also be accessed via the myAudi app – will include the Ionity network.

The service covers all forms of charging and billing is handled centrally under a single contract, with standard, clear pricing models.

Audi will also introduce a plug & charge function from 2019, which enables the Audi E-Tron to authenticate itself at charging stations via cryptographic procedures, meaning no card will be needed. All Audi E-Tron models rolling off the assembly line from mid-2019 will support this function as standard. Customers can also use plug & charge privately to unlock their connect charging system. This then eliminates the need to enter a PIN to protect against unauthorised use.

“The e-tron Charging Service builds confidence in our electric initiative. Following on from the Audi e-tron, in 2019 the Audi e-tron Sportback will be the second electric car to go on sale, followed in 2020 by the Audi e-tron GT from Audi Sport. We already have the right answers to many of the questions and concerns regarding charging,” said Peter Mertens, Member of the Board of Management of Audi AG for Technical Development.