Audi has started production of the e-tron electric SUV at its factory in Brussels, ahead of the first deliveries due by the end of the year. 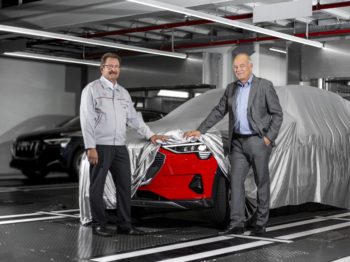 Due to be revealed on 17 September, the E-Tron offers a range of 250 miles and can regain most of that range in around 30 minutes using a high-power 150kW on-board charger. The first compatible units are set to be installed in the UK within months, though the e-tron will be able to use existing 50kW charging points.

It follows a major process of modernisation at the Audi Brussels factory, which had previously produced the A1 supermini – now being built alongside the Seat Ibiza in Martorell, Spain. The carmaker said it has rebuilt the body and paint shops and assembly line, and now has on-site battery production too. Renewable energy and carbon offsetting means this is the world’s first certified CO2-neutral mass production car in the premium segment, Audi added.

Patrick Danau, managing director of Audi Brussels, said: “Audi built up numerous competencies in-house for the Audi E-Tron and developed both the battery technology and the actual drive system itself. And employees rethought, planned and implemented many stages of production.”