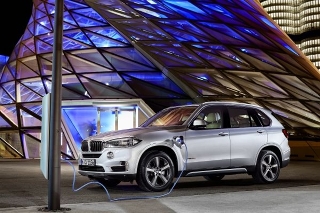 The X5 xDrive40e combines a 245bhp four-cylinder turbocharged petrol engine with a 113bhp electric motor, both of which are able to drive all four wheels through an eight-speed gearbox.

Combined power output is 313bhp, enabling the car to reach 62mph in 6.8 seconds from rest, and the 9.0kWh battery offers a range of 19 miles to a full charge. This takes just under four hours from a domestic socket, or two hours and 45 minutes from a 3.5kW wallbox.

As a result, BMW’s first plug-in hybrid outside the i sub-brand returns 85.6mpg on the NEDC plug-in hybrid test cycle and emits 77g/km of CO2 – similar figures to the Porsche Cayenne S e-Hybrid, and just outside the 75g/km threshold for the UK government’s £5,000 Plug-in Car Grant.

Drivers can maximise the range using three driving modes, which enable battery power to be saved or fully electric driving to be selected. The X5 xDrive40e features intelligent navigation which can manage energy reserves for urban parts of the route, and charging and cabin temperatures can be controlled via a smartphone app.

The plug-in hybrid joins the range as a drivetrain option offered across several trim levels, including M-Sport versions. UK pricing has not been announced yet.