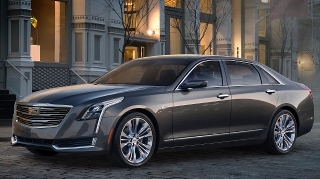 Using the same lightweight aluminium body as the rest of the range, the plug-in hybrid combines a 2.0-litre four-cylinder turbocharged petrol engine with a motor-generator to produce 335bhp and 432lb/ft – close to the V6 petrol version – while offering twice the fuel economy.

Its 18.4kWh lithium-ion battery pack draws on technology from the ELR and, though range details have not been announced yet, Cadillac says this will enable the saloon to undertake short commutes without using the petrol engine.

Also shared with the ELR is the Regen-on-Demand feature, activated by paddles on the steering column, which uses the motor to slow the car, and drivers can hold the electrical charge for urban sections of a route.