Charge your EV quicker than cooking a microwave meal* 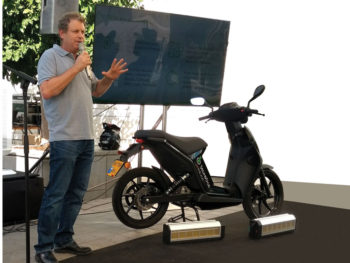 For many, the main barrier cited against mass market EV adoption surrounds the ability to recharge a vehicle in a convenient amount of time.

While most electric vehicle early adopters quickly get to grips with overnight charging at home, or daytime charging at a workplace, these circumstances aren’t arguably mass market – with many people living in homes without the luxury of off-street parking.

The solution is to try to mimic the process of filling a petrol or diesel car, which means two things:

In a nutshell, StoreDot’s battery know-how answers the second part of the charge/battery conundrum.

The ground-breaking chemistry enabling this remarkable feat is scalable, meaning that although the scooter was only equipped with a 7kg, 0.75kWh battery pack, the same five-minute recharge time would be possible in a battery electric vehicle with a 200+ mile range. Of course, that scenario would require a compatible high-power charger, such as those already undergoing installation by Ionity, Fastned and others across Europe and beyond.

StoreDot has had £130m investment by Daimler, Samsung, BP and TDK. The company’s founder and CEO, Dr Doron Myersdorf believes that with a production facility in place, its Flash Battery could, for example, appear in an AMG electric car as early as 2023.

The battery uses lithium-ion chemistry which in turn means it doesn’t suffer from a need for fanciful other-worldly rare materials. Instead, StoreDot has changed the cathode from graphite, which is the prime cause of heat build-up that prevents ultra-rapid charging, to a set of metalloids: silicon, germanium and tin. The battery uses nanoparticle technology to rearrange ions into smaller groups than is typical, allowing for the higher rates of charge and crucially without causing excessive heat.

In terms of longevity and price, StoreDot says its battery is comparable to today’s lithium-ion in terms of cycle-life, while its cost is only marginally more expensive.

StoreDot is currently in talks to build its proposed ‘Gigafactory’ in either the US or Europe, with the intention to commercialise its ‘Flash Battery’ technology for the mass EV market.

“Our grandchildren will not believe that we charged overnight. It will be a thing of the past. We are stuck with a 100-year-old technology and nobody took the effort to replace the active materials in the battery. This is why we believe this is a real game changer for the whole energy storage market,” Dr Myersdorf concludes.

*Based on a ready meal taking longer than 5 minutes 10 seconds to prepare.

Previous: Engenie to install 2,000+ rapid chargers
Next: Ford and Volkswagen tie up on EVs and AVs