Chevin Fleet Solutions says it’s seeing eco and economic benefits after switching more than half its inhouse fleet over to electric vehicles or plug-in hybrids as it phases out petrols and diesels. 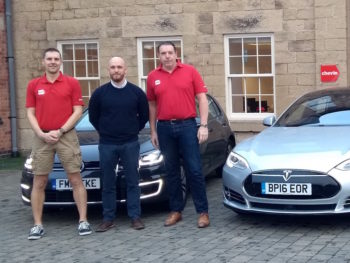 The software specialist, which has its head office in Derbyshire and operates globally, joined the Go Ultra Low campaign in 2016 and committed to ensuring that at least 5% of its fleet is electric by 2020 – a target that it’s already beaten.

Vehicles on its fleet include a Tesla Model S, a Mercedes-Benz PHEV, Volkswagen Golf PHEV and a Hyundai PHEV. Vehicles are being charged with the help of ‘green’ electricity from solar panels on the roof of the head office supplied via two electric charge points. Plans are in place for additional charge points as other diesel and petrol-fuelled vehicles within its fleet are phased out.

Ashley Sowerby, managing director, Chevin, said: “We found that since switching part of our fleet to electric and hybrid vehicles, our running costs are now much lower as we do our bit for the planet through reduced emissions.

“Solar panels in effect provide ‘green’ fuel for the vehicles. Planning journeys to include charge points hasn’t really been an issue as they tend to cover daily drive requirements comfortably on a single charge.”