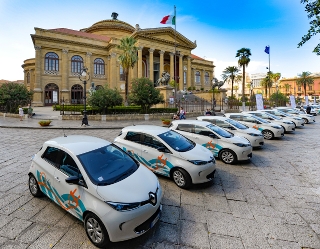 The service is run by the city in cooperation with local transport company Amat in partnership with Renault and charging specialist Enel and has been launched to reduce traffic in the city – which was listed as a UNESCO world heritage site in July 2015.

The 24 Renault ZOEs in the car-sharing service will be available in five of the city’s carparks: Piazza Massimo, Piazzale Ungheria, Via Malta, Piazza Ignazio Florio and Viale della Libertà. The service will be extended to three more carparks by the end of 2015.

The Sicilian ZOEs are fitted with smartcard readers to ensure compatibility with the city’s car-sharing system.

The partnership also includes 16 22kW charging stations installed by Enel at strategic points throughout the city.