Could tyres power the electric revolution?

By Jonathan Musk / 1 year ago / International News / No Comments 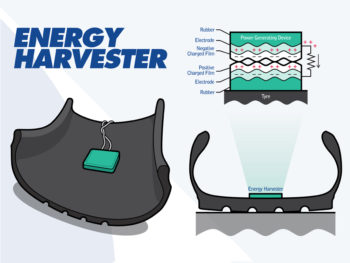 In answer to the title question of tyres powering the electric revolution, sadly the answer is likely ‘no’ for the time being, although the technology’s engineers believe the Energy Harvester could power sensors used in TPMS (Tyre Pressure Monitoring Systems) and other automotive devices without the need for batteries.

Falken’s parent company, Sumitomo Rubber Industries, together with Professor Hiroshi Tani of Kansai University in Japan, developed the tyre technology to take advantage of the build up of static electricity, known as frictional charging, to produce power efficiently as the tyre turns.

Inside the Energy Harvester are two layers of rubber each covered in an electrode, along with a negatively charged film that interfaces with a positively charged film. When fixed to the inside of a conventional tyre carcass it generates electricity as the tyre deforms during rotation.

The technology has showed promise enough to earn it selection by the Japan Science and Technology Agency, which means its feasibility will be further investigated.