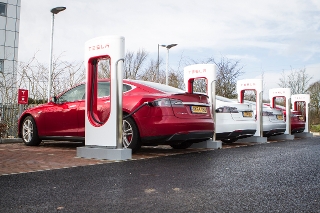 According to head of valuations, Rupert Pontin, 2020’s EU-wide target of 95g/km average CO2 emissions means the technology’s current 2% share of the market will have to increase, in turn meaning values will stabilise as consumers get used to the technology.

But, he said, some models are already very close over a three-year, 60,000-mile lifecycle. The  Tesla Model S, at 43%, is almost identical to the BMW 535d M Sport, for example, while BMW’s own i3 is edging closer to the strong-performing 320d.

Although the Nissan LEAF, at 29%, is one of the poorest on the market due to the high used volumes, the recent announcement of a €5,000 battery replacement cost has reduced uncertainty and helped with forecasting, he explained.

“Clearly, there is still a difference here between EVs and diesels but there are signs that it is closing all the time. Crucially, when the overall running costs of an EV are taken into account, factors such as savings on fuel mean that they may beat traditional models,” said Pontin.

“It is likely that EV RVs will continue to close the gap on diesels as used car retailers and buyers became more familiar with the technology. Critically, the battery power improving will mean a better real world driving range.”