By Natalie Middleton / 4 years ago / International News, Tech / No Comments 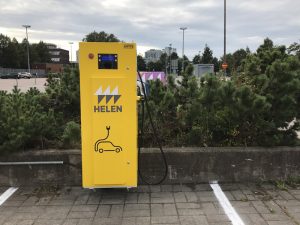 Said to be a first – with Virta claiming that no similar V2G charging stations are available elsewhere in Europe – the V2G charging point in the former Suvilahti power plant opens for public use next Tuesday (26 September).

An initial pilot run will offer Virta end users who drive electric vehicles a free charge in return for a small discharge, made possible by the bidirectional charging device. The V2G function will be implemented so that the vehicle battery will be fully charged despite supporting the electricity network, acting as a buffer, which means the battery’s charge would only fluctuate by a few percent once recharged.

In the initial stage, the V2G charging point will be suitable for Nissan electric vehicles.

In the longer term, the charging point will enable future EV owners to gain financial benefits for stabilising the grid, which the firm says driver participation will be crucial when EVs and intermittent renewable energy sources become more common.

Nissan’s zero emission strategy manager Jarkko Ahlbom said: “Our joint project with Helen and Virta is the first step towards a fully integrated ecosystem in electric vehicle use in Finland. The development possibilities in energy management are better than ever before with the merging energy and vehicle sectors. Nissan sees electric vehicles as more than just a means of transport: the batteries of electric vehicles can also be utilised as mobile energy sources.”