A fully electric taxi based on the Nissan e-NV200 has launched for London cab drivers, bringing eco benefits to both drivers and passengers as well as providing a rival to the plug-in hybrid range-extender LEVC TX. 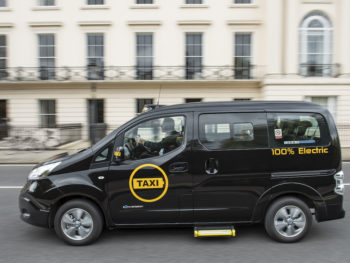 Developed by UK-based vehicle manufacturer Dynamo, the new taxi brings a range of up to 187 miles (WLTP City cycle) from a single charge and supports CHAdeMO 50kW rapid charging technology.

Priced at £47,995 after the Plug-in Car Grant, it marks the first fully electric London black cab in 120 years; the last time the capital had a fully electric black cab was in 1899 in the form of the Bersey Taxi, which had a range of 30 miles.

The new black cab, which starts deliveries this month, was unveiled by Dynamo CEO and founder Brendan O’Toole this week at the International Clean Air Conference at London City Hall.

“The Dynamo Taxi is the UK’s first Transport for London-approved fully electric taxi and is designed with both drivers and passengers in mind. With a low starting price, and a reliable vehicle architecture in the Nissan e-NV200, we are offering a truly unique solution to the tens of thousands of taxi drivers in London and cities across the UK.”

Previous: Moixa and Energia team up to support smart energy system in Ireland
Next: EV drivers get free electricity on new SSE tariff