By Alex Grant / 5 years ago / New Cars, Road Tests / No Comments
Petrol, or diesel? It’s not so long ago that, for most fleets, picking a suitable drivetrain was a binary choice. But technology is altering the playing field, and the Hyundai IONIQ offers a glimpse of the way it’s likely to evolve in the coming years. 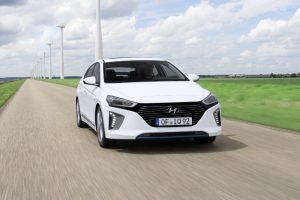 There will be no conventional diesel or petrol versions of this car. Instead, Hyundai will offer a choice of petrol hybrid and fully electric versions from launch, and a plug-in hybrid will follow next year, expected to account for over half of the 4,000 UK annual volume. Think of this as a Korean alternative to the Prius and the LEAF, rolled into a single model line.

Hyundai has re-engineered a lightweight platform to accommodate electric drivetrains, and most of the aerodynamic silhouette is unchanged between the different versions. It occupies a similar footprint to the Prius, with the IONIQ Electric marked out by a closed grille instead of the Hybrid’s slatted version, and copper accents instead of blue. These are variants, not different cars.

But there are big differences underneath. From launch, the Hybrid is expected to be the bigger seller and it’s offered in a choice of three trim levels with the option of larger wheels for the top-spec version. It’s powered by a 103bhp 1.6-litre petrol engine and 43bhp electric motor, producing a combined 139bhp. The latter is capable of providing assisting the engine to save fuel, harvesting energy through regenerative braking or powering the car independently for short distances and at low loads.

It works almost seamlessly. The torque from the motor transforms the performance of what is normally an unwilling engine, particularly around town. As Hyundai has used a dual-clutch gearbox instead of the continuously variable transmission used by Toyota and Lexus, there are six ratios to shift through and the engine doesn’t have a tendency to rev hard and moan while accelerating to motorway speeds. Sport mode – available by knocking the gear lever to the side – sharpens the steering, throttle and gearchanges for higher-speed driving.

The IONIQ Electric feels very different. It uses a 118bhp electric motor, powered by a 28kWh lithium-ion polymer battery under the boot floor and rear bench – that’s only slightly less than the latest LEAF. Hyundai is claiming a 174-mile range, which puts it among the best electric cars on the market, and DC rapid charging via the port under the fuel flap can restore 80% of the range in around half an hour.

It’s easy to get used to, despite dispensing with a conventional gearstick in favour of a bank of buttons on the centre console. The motor delivers strong straight-line performance, even up to cruising speeds, and the lack of engine rumble doesn’t expose wind or road noise. Paddles behind the steering wheel mean drivers can vary regenerative braking power, simulating slowing through the gears of a conventional gearbox.

There are compromises, though. The IONIQ Electric’s larger battery means it misses out on the sophisticated multi-link rear axle and feels noticeably more unsettled on rough surfaces than the Hybrid. Load space is more restricted in the EV, the centre console controls are plasticky and both versions lack headroom in the front and rear rows due to the low roofline.

So the IONIQ shapes up as a car best suited to fleets prioritising environmental efficiency, rather than blurring the lines by aiming for broader user-chooser appeal. But, once all three drivetrains are available, it will become one of the few plug-ins capable of meeting a broad range of drivers, and a sign that vehicle selection is only going to become more complicated in future.

Within one model range, the IONIQ’s multiple electrified drivetrains mean it can meet the needs of most business fleets. But it’s a car that prioritises efficiency over interior practicality, and Kia’s platform-shared Niro hybrid crossover is arguably more likely to appeal to user-choosers.