By Alex Grant / 5 years ago / New Cars, Road Tests / No Comments
In the first six months of this year, Kia sold more Sportages in the UK than it did during a record 2015. Once a brand synonymous with small, cheap cars, it’s now famed for stylish off-roaders. So it should come as no surprise that its first hybrid product for the UK is a crossover. 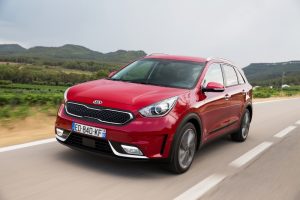 The Niro shares its platform with the Hyundai IONIQ, and will only be sold as a petrol hybrid. But it’s targeting buyers with crossovers, not other hybrids, on their shopping lists. It’s longer and taller than a Cee’d, and thus bigger than a Juke-sized crossover, but it’s also lower and smaller than the Sportage. That will put Kia up against the Toyota C-HR when it arrives later this year.

So externally it’s an inbetweener, but that’s irrelevant. Drivers moving out of a last-generation Sportage will find there’s more legroom in the front of the Niro, more headroom all round and a boot space that’s almost as large as its bigger sibling. This will mainly be a conquest car for Kia, but it’s also got a role as a low-compromise downsizing option, at least for those who can live with a slightly lower driving position.

There will be four trim levels in the UK, comprising familiar 1, 2, 3 and ‘First Edition’ versions. Kia expects the ‘2’ grade to be most popular with fleets, featuring half leather upholstery, rear parking sensors and sat nav with TomTom live traffic information, but also retaining the 16-inch wheels and 88g/km CO2 emissions. Move up to the 18-inch wheels and CO2 climbs to 101g/km, though P11d pricing is less than the most frugal Sportage from the ‘3’ upwards.

When you consider that the Niro is more fuel efficient than the 1.7-litre diesel Sportage, doesn’t attract the 3% BiK levy and offers an automatic transmission, it presents an interesting business case for drivers and operators. Particularly city-based fleets with a high user-chooser content.

Kia might have opted for a less aerodynamic body than the IONIQ, but those who need the space will still be impressed by the economy. Its 1.6-litre petrol engine is augmented by an electric motor which can also recharge its lithion-ion polymer battery via regenerative braking. That’s energy which can be reused to drive short distances fuel-free, or to give the engine a helping hand, reducing petrol consumption under load.

Combining the two power sources produces 139bhp, the electric motor providing a noticeable torque boost off the mark and for short periods of acceleration, but with a predictable sacrifice in economy as the petrol engine is doing most of the work. Like most hybrids, it favours smooth driving.

Otherwise, it feels entirely normal. Avoid the white plastic accents and the cabin is one of Kia’s best, almost upmarket with its accents of silver and futuristic instruments. Ride quality is excellent on the 16-inch wheels, though still impressive on the 18-inch versions, and it’s car-like in its agility. There’s space for four tall adults inside, and efforts to curb wind and road noise are noticeable, particularly when it’s gliding along on electric power.

Products like this are perhaps under-incentivised in the UK. Kia is cautiously predicting volumes of around 2,500 cars per year, with over half going to fleets, but it’s not hard to imagine it selling more. The real volumes will come with the ultra tax-efficient plug-in hybrid in 2017. Not enough to de-throne the Sportage as the range spearhead, but an interesting string to Kia’s bow nonetheless.

Don’t be distracted by the Niro’s small size, this is one of the most space-efficient crossovers on the market, and a genuinely efficient hybrid without relying on frequent mains charging. With the Sportage lagging behind class leaders on CO2, and not offering an automatic gearbox, this could be a useful way to fill gaps in the range.