By Alex Grant / 5 years ago / New Cars, Road Tests / No Comments
Still growing exponentially and beloved of company car drivers, the C-SUV segment is synonymous with diesel power, particularly in fleet. It’s a crowded sector and a tough one to crack, even following segment norms, which might make Toyota’s first RAV4 Hybrid sound like an odd fit. But this is a game changer – perhaps not in volume terms, but it is important. 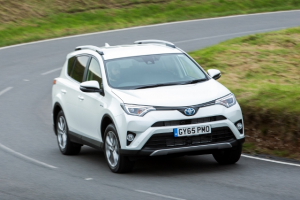 Running costs have long made diesel a no-brainer in this segment, and that won’t change overnight. But, with air quality beginning to resonate, this is exactly what mainly-urban drivers choosing a crossover based on space requirements really ought to be looking into. Toyota led by example with the Prius, and the RAV4 might be about to do the same.

Mechanically, it’s similar to the Lexus NX 300h. There’s a 2.5-litre petrol engine, electric motor and continuously-variable transmission under the bonnet, and another motor can be added at the rear axle to offer part-time four-wheel drive.

Despite the large engine, two and four-wheel drive versions come in under 120g/km CO2. That’s less than the RAV4 emits with its new 2.0-litre diesel engine, and up with the most efficient crossovers of this size. With the extension of the 3% Benefit in Kind levy for diesels, Toyota is in an interesting place.

Fuel economy is a little harder to compute. Combined cycle figures show the diesel is the most efficient, but that’s weighted towards extra-urban use where the hybrids have to lean on their petrol engines. The ability to switch in and out of electric mode at lower speeds means the hybrids are more efficient around town. Real-world fuel economy is heavily dependent on the routes it’ll cover.

Economy aside, inner-city and flowing country roads are where the RAV4 feels most at home. It’s quick off the mark, albeit not quite as quick as the claimed 194bhp might suggest, and less prone to droning yawns of acceleration than Toyota hybrids of old. On an admittedly fairly flat test route, both the two and four-wheel drive versions returned almost 50mpg without much effort. Economy in the mid-40s shouldn’t be difficult on a mixed route in the UK.

Hybrid technology suits the RAV4. Toyota has stiffened the chassis and bolstered sound deadening as part of this year’s refresh, and the lack of diesel clatter makes this feel quite luxurious. Ride quality is very good, even on 18-inch wheels, and there are no gearchanges while accelerating. The compromise is cargo space – petrol and diesel versions have a flat load area with the rear seats folded, but creating space for the battery means there’s a step on hybrids. Cabin aesthetics aren’t up to the exterior design, either.

This isn’t a niche model. Toyota reckons half of UK RAV4s will have a hybrid drivetrain, though that’s largely a result of discontinuing the four-wheel drive diesel – customers will be directed towards the dual-motor hybrid instead. There are a pair of two-wheel drive only Business Edition trims vying for user-choosers, and opting up to the hybrid version also means adding LED headlights, keyless entry and a power tailgate. Top-spec Icon and Excel models are only available with four-wheel drive.

In the UK, the biggest threat for Toyota is plug-in hybrids. Tax breaks for ultra-low emission vehicles mean the Outlander PHEV and similar forthcoming products have a significant BiK advantage over the RAV4 Hybrid. Charged regularly, they’re also potentially cheaper to run.

But Toyota has an interesting USP here, particularly against equivalent diesels, and it’s shown by sticking with hybrids that it can take technology from niche to mainstream. This could well be another model other manufacturers feel the need to catch up with.

Hybrid SUVs have traditionally only made sense in markets with limited diesel take-up. But the RAV4 offers a genuine alternative to the segment’s default diesel engine, with the convenience of an automatic gearbox and fewer air quality worries. It’s a very sensible choice.