Honda has revealed the first images of its CR-V Hybrid Prototype, ahead of its official reveal at the 2017 IAA Frankfurt Motorshow. 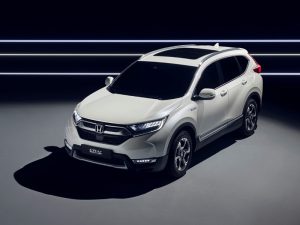 Following the earlier announcement that Honda will reveal its all-electric Urban EV Concept at the 2017 IAA, the company has revealed the first images of its Europe-destined electrified SUV, the CR-V Hybrid Prototype. The car previews the forthcoming European specification CR-V model range, which Honda has confirmed will not have a diesel variant.

Honda has also revealed some of the powertrain details including the two-motor i-MMD (Intelligent Multi-Mode Drive) system, which comprises an electric motor with a 2.0-litre i-VTEC four-cylinder Atkinson cycle petrol engine.

Honda has not revealed specific details about the gearbox, but indicates that the CR-V Hybrid Prototype is fitted with, “a single fixed-gear ratio” that should provide a smooth drive. Other new European-spec CR-Vs will be available with either a six-speed manual or continuously variable ‘CVT’ transmission. Previous generations of Honda hybrid using the IMA (Integrated Motor Assist) technology were equipped with either a CVT (Honda Civic Hybrid, Jazz Hybrid, Insight Gen 2) or a manual gearbox (Insight Gen 1, Honda CR-Z).

Honda say their i-MMD hybrid system, “determines how to use fuel and electrical energy in the most efficient way, meaning there is no requirement on the driver to adjust between the three driving modes; EV Drive, Hybrid Drive and Engine Drive.”

Crucially, Honda has confirmed the CR-V Hybrid Prototype does have an EV Drive mode, which powers the car using nothing but batteries, but has not yet stated the range in this mode. Likewise, Honda has confirmed the car offers some regenerative braking that puts energy into the battery that would otherwise be lost when slowing down. In addition, any excess power produced by the petrol engine is sent to the battery via the generator, the company says.

In Engine Drive mode, the wheels are directly driven by the 2.0-litre engine, with an ‘on-demand’ peak power ‘boost’ available from the electric propulsion motor. Honda’s CR-Z hybrid, that used the different IMA hybrid system, offered a ‘boost’ button on the steering wheel.

The 2018 CR-V will also be specified with Honda’s 1.5 litre VTEC TURBO petrol engine, with a choice of either 6-speed manual or continuously variable ‘CVT’ transmission.

More details about the all-new Honda CR-V for Europe will be confirmed early 2018, with the European car launch later the same year.

Previous: Renault to reveal electric car concept at Frankfurt
Next: Lexus model line-up to include plug-ins and fuel cells by end of decade