The Square Mile’s first rapid electric charging point has been installed, with further rapid charge points to follow in the coming months. 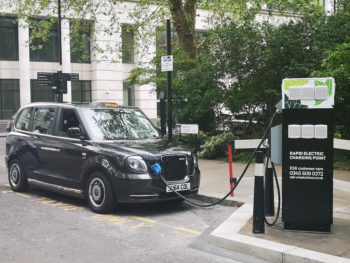 Located at Noble Street, the first rapid charging point is dedicated for use by the new zero-emission capable taxis, while forthcoming charge points will be installed by the end of the year at Baynard House car park at Queen Victoria Street, and are expected to be available to both ZEC taxis and small freight vehicles.

Meanwhile the City of London Corporation’s Markets Committee has also agreed to install a rapid electric vehicle charge point in the Billingsgate Market public car park, which would allow two vehicles to be charged simultaneously.

The new rapid charge points join the 80 charging points that are publicly available in the City of London, including 30 charging points across five car parks in the Barbican and a further 50 in City Corporation public car parks.

Meanwhile, the City of London Corporation’s draft 25-year Transport Strategy – which will be considered for adoption by the Court of Common Council on 23 May 2019 – proposes a number of policies which will ensure cleaner air in the Square Mile and support the transition to electric vehicles for taxi, freight and buses. These include championing Britain’s first large-scale Zero Emission Zone to cover central London and, in the interim, introducing local Zero Emission Zones covering the City Cluster and the Barbican and Golden Lane.

An Electric Vehicle Charging Action Plan will be published by December 2019 to support the successful delivery of the Transport Strategy, identifying how many charge points and hubs are required up to 2022, as well as longer-term forecasts.