Ford has taken the wraps off the production version of its new Transit Custom plug-in hybrid electric vehicle as it also announces a new diesel engine for the range. 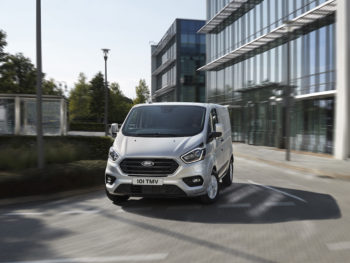 The first PHEV in the segment, the new model, which debuts at the IAA Commercial Vehicle show in Hannover, Germany, retains the load volume and one-tonne payload capability of the diesel-powered van but features a PHEV powertrain that brings an official 31-mile (50km) electric range or a total range of 310 miles (500km).

The Transit Custom PHEV uses a series-hybrid driveline configuration, with the vehicle’s wheels driven exclusively by an electric motor, rather than by the combustion engine, while Ford’s 1.0-litre EcoBoost engine generates additional charge for the batteries when required.

Three selectable drive modes are offered: EV Auto, which serves as the default and makes the decision how to use the energy sources, EV Now, which uses only electric power until the battery is depleted, and EV Later, which uses the combustion engine.

Charging can be carried out using a domestic 240V 10-amp power supply, achieving a full charge in five hours, or a commercial 240V 16-amp or 32-amp supply, which can bring the pack to full charge in three hours.

Already on trial with various fleets, the PHEV model will enter volume production in the second half of 2019.

At Hannover, Ford also announced updates to the Transit Custom range, which roll out from mid-2019 and are shared with the new two-tonne Transit model that also debuted at the show. Changes include the addition of a new version of Ford’s 2.0-litre EcoBlue diesel, which gets a more powerful variant, and a mild hybrid powertrain option.