Ford to go all-electric in Europe by 2030

Ford’s passenger vehicle range is to go all-electric in Europe by 2030, supported by “expressive new vehicles and a world-class connected customer experience”. 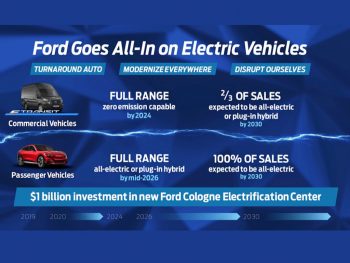 By mid-2026, 100% of Ford’s passenger vehicle range in Europe will be zero-emissions capable, all-electric or plug-in hybrid and this will change to all-electric by 2030

The commitments are a significant advancement on the carmaker’s previous plans – it had announced in 2019 that every model from the Focus onwards would include an electrified option. The plans also represent a doubling of the company’s EV investment ambition; the brand will now invest $22bn (€20.7bn / £18.0bn) globally in electrification by 2025.

The new plans are being spearheaded by a $1bn (€828.7m / £721.2m) investment in a new electric vehicle manufacturing centre in Cologne – Ford’s first European-built, volume all-electric passenger vehicle for European customers is planned to roll off the lines in Cologne starting in 2023, electric passenger vehicle for European customers will be produced at the facility from 2023, with the potential for a second all-electric vehicle to be built there. 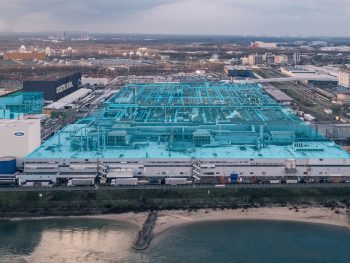 Ford’s first European-built, volume all-electric passenger vehicle for European customers is planned to roll off the lines at its new EV centre in Cologne starting in 2023

Ford of Europe president Stuart Rowley said: “We will offer an exceptional range of electrified vehicles, supported by customer-centric digital services and experiences, allowing our customers to come with us on the journey to a fully electric future, starting right now with the launch of the all-electric Mustang Mach-E. In combination with our leading commercial vehicle business, this will form the basis of a sustainably profitable Ford business in Europe.”

Ford returned to profit in Europe in the fourth quarter of 2020, driven by the creation of a more targeted vehicle line up within three customer-focused business groups – Commercial Vehicles, Passenger Vehicles and Imports – and partnerships to drive growth and improved levels of profitability across the business. This includes its previously announced tie-up with Volkswagen while its Ford Otosan joint venture is also providing cost savings.

Ford will also drive growth in its commercial vehicle business via an ‘ecosystem’ of connected services co-developed with customers. These include, connected uptime and productivity services such as the FordPass Pro smartphone app for fleets of up to five vehicles, and the launch of the Ford Fleet Management, created by Ford and ALD Automotive last year to bring a ‘one-stop shop’ approach for fleets in the UK and Europe.

It’s also switching its vehicle operating systems over to Google under a partnership that will “be the basis of transformed ownership experiences and services for both the company’s commercial and passenger vehicle customers”.

Additional details of the plans are due in the coming months.