By Alex Grant / 5 years ago / Features / No Comments
One year into its new ownership, the Source London charging network isn’t only improving its offering to electric vehicle owners, it’s about to become the basis of a large-scale car sharing scheme. Alex Grant finds out more. 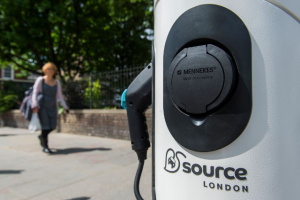 Source London will grow more than six-fold in the next three years, with huge improvements in reliability targeted.

In its first year, the group’s subsidiary company BluePoint London has invested £10m in a back-office system enabling boroughs to see how often the network is used, and replaced units as necessary. At the end of August, it reached 85% accessibility and grew network slightly to 845 charging points. By the end of the year, that’s expected to reach at least 98% of 1,000 units.

To get it off the ground, membership is free until next March, after which point BluePoint London will set a user fee of less than £2 per hour to use the points. “We’re not anxious if we don’t make money tomorrow, at some point we will make good money and we’re not subsidised,” says Cédric Bolloré.

BluePoint London’s long-term goal is a city-wide electric car-sharing scheme, called BlueCity, which will be supported by the charging points. This will use the same vehicles deployed on the Autolib service in Paris, but painted red to match London buses. The first 100 vehicles will be deployed early next year, with plans to grow in line with the network – one car per two charging points.

For the most part this will function like Bolloré’s Autolib service. In Paris, the scheme complements public transport in areas with low coverage. Drivers can book cars online or via a smartphone app, parking them wherever their journey ends as they would in an owned vehicle.

“London should be even more electric vehicle orientated than Paris – it should be the leading city in Europe,” says group director, Cédric Bolloré. “We want to give the citizens of London an easy way to use non-polluting form of transport. Autolib appeals to public transport customers who occasionally need to use their own car – one Autolib car takes nine cars off the street according to our studies.”

The loan ends automatically once the car is connected to the charging point, and incentives are offered for members to clean and re-balance the fleet. All vehicles are remotely monitored to avoid journeys outside their range, and access is denied if the battery is below charge. However, Paris has shown that most vehicles undertake 10-12 journeys per day, at around six miles or 37 minutes per user – the state of charge rarely goes below 80%.

Christophe Arnaud, managing director of BluePoint London, says it could also be integrated with Oyster payments: “It took some time in Paris, it’s not that simple to merge the systems but it will happen. It will be discussed once we deploy enough cars. Paris is big enough to see cars everywhere, it’s big enough to negotiate that. If there are only 50-100 cars in London, it’s not big enough to negotiate with Transport for London. It’s something we’re trying to do in Paris, and our aim in London too.”