Complimentary car charging is now available at 100 Tesco stores across the UK, giving drivers more than 1,000 miles of free driving per year. 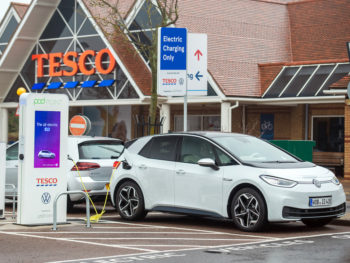 VW’s forthcoming ID.3 hatch has already made its debut on UK roads while out trying the chargers at the Tesco Potters Bar store

Announced a year ago, the partnership between the supermarket, Volkswagen and Pod Point will see around 2,400 charging points installed in total, offering customers free charging using a standard 7kW fast charger or access to a 50kW rapid charger “for a small cost in line with the market rate”.

With newly released research from Volkswagen revealing the average Brit spends 50 minutes per week in a supermarket, drivers making use of the complimentary charging facilities could effectively get 1,170 miles a year free while shopping.

In addition, all electricity used to charge cars at Tesco comes from renewable sources.

Erik Fairbairn, founder and CEO, Pod Point, said: “With the rollout now under way, we are witnessing a pivotal moment for the UK’s rapidly expanding public charging network.

“Providing smart, easy-to-use chargepoints at this scale is likely to accelerate the transition to electric cars up and down the country. Being able to top up while you shop at so many locations makes it more convenient to go electric than ever before.”