Pub company Fuller’s is installing charge points from Pod Point to help both its customers and its staff make the move to electric vehicles. 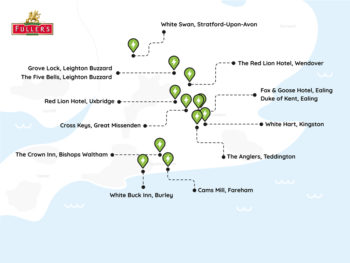 The company, which owns almost 400 managed and tenanted pubs and hotels, has signed a three-year preferred supplier deal with Pod Point, starting with new chargepoint installations at 10 of its London and south-eastern venues. This is in addition to three Fuller’s sites that already boast Pod Point EV charging facilities, and the roll-out to more pubs is planned, with the new chargepoints free to use for both customers and staff.

The project is one of the largest-scale rollouts in the hospitality sector and is intended to appeal to the rapidly growing number of EV drivers on UK roads and help the pub company further differentiate its venues from competitors.

Pod Point is also working with Fuller’s to carry out a trial monitoring the average daily mileage of its fleet. This data will help Fuller’s identify which parts of its fleet could easily be switched to EVs.

Erik Fairbairn, Pod Point CEO and Founder, said: “EV charging should be something drivers don’t have to think about and having chargepoints available in locations where people typically spend an hour or more is hugely important in supporting the UK’s transition to EVs.”

Previous: AFRs coming for EVs – but not for PHEVs
Next: Low-carbon funding in Scotland helps drive 2032 plans