Harald Krüger, chairman of the board of management of BMW AG, confirmed the addition of a fully-electric MINI to the range in 2019, followed by a fully-electric BMW X3 from 2020, in a stakeholders conference call on 30 September. 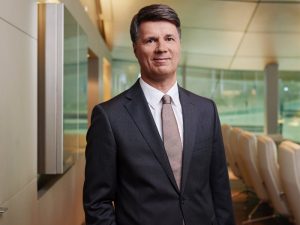 Harald Krüger, chairman of the board of management, BMW AG

The production-ready fully-electric MINI follows successful trials of MINI E in 2010. The converted MINI Cooper undertook a series of field trials in several countries, including the UK, US, Germany, France, Japan and China.

The extension of the range forms part of Phase II of the company’s electrification strategy, alongside the development of a new R&D centre for autonomous vehicle research in the Munich area.

Operating from 2017, BMW claims the campus will be the largest of its kind Europe, and together with the FIZ Research and Innovation Centre in Munich and cooperating partners, will develop and test fully-autonomous vehicles at the new site.

Previous: Nissan looks for businesses to host Vehicle-to-Grid technology
Next: 69% of motorists would consider an EV for next company car