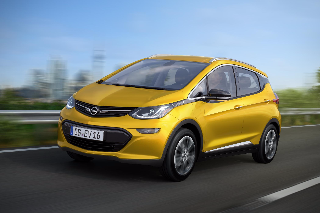 Unveiled at the Consumer Electronics Show (CES) in Las Vegas last month, the Bolt features a 60kWh battery – twice the capacity of the latest Nissan LEAF – and offers a range of 200 miles on the U.S. EPA test cycle. Pricing starts at less than $30,000 (£20,000) in the United States and, unlike the Ampera, it’s fully electric; there is no petrol engine.

Opel Group has yet to confirm pricing, or whether it will be available as a Vauxhall. However, to compare it fairly, it’s worth noting that the New European Drive Cycle (NEDC) typically produces higher range indications than its U.S. equivalent. The Nissan LEAF returns a 107-mile range under U.S. testing, and 155 miles on the NEDC, which means the Ampera-e could launch with a range of almost 300 miles in European markets.

The drivetrain is unlikely to change much – producing 197bhp and 266lb.ft and reaching 62mph in around seven seconds, which is faster than the BMW i3. Chevrolet has also equipped the Bolt with the Combined Charging system, offering a 7.2kWh AC charge and DC rapid charging capability, and the Ampera-e is likely to offer the same, but with the European Type 2 connector.

Due to the large battery, rapid charging to 80% takes an hour, but the range regained per minute plugged in is the same as most other electric vehicles on the same connection.

Opel group CEO Dr. Karl-Thomas Neumann, said: “Electric vehicles have the potential to make a significant contribution to climate protection and emissions reduction. The new Ampera-e will open the road to electric mobility by breaking down the barriers of high price and short driving range.”