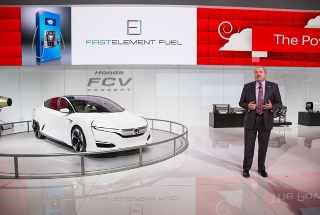 In a press statement, John Mendel, executive vice president, automobile division, American Honda Motor Co Inc, said that both Civic models would be axed due to this autumn’s launch of the 10th-generation Civic, which will bring advanced fuel economy through conventional engine technology.

He added: “The Civic Hybrid has played a very important role in helping promote customers' appreciation for hybrid technology and is presently the only hybrid variant of a mainstream compact sedan. For the future we will place our focus more on our two-motor hybrid system, where we feel we can meet the needs and expectations of customers for hybrids and achieve greater reduction of CO2 emissions.”

Mendel added that the carmaker will not be offering a plug-in version of the Accord going forward while the new version of the regular Accord Hybrid will debut in early 2016 with the next generation of Honda's two-motor hybrid system. He also said that enhancements to production methods for the two-motor system would help lead to a strong increase in Accord Hybrid sales.

Other models in the offing include Honda’s fuel cell vehicle, which is due next year and will be followed by an all-new battery electric model and the all-new plug-in hybrid model.

“So, Honda is committed to offering vehicles with best-in-class fuel economy today through a new generation of powertrain technology. We're developing an entire new generation of electrified vehicles that will continue our leadership tomorrow. And in the process we are creating the strongest and most balanced vehicle line-up in our history,” he concluded.

Previous: Majority of drivers would consider plug-in vehicle for next car
Next: PSA and Bolloré join forces for car sharing