Honda has published a teaser sketch of its Clarity Electric and Plug-in Hybrid models prior to their debut in April at the New York International Auto Show. 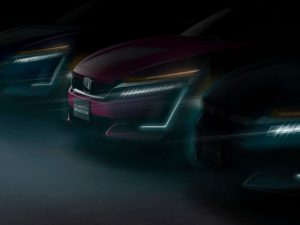 Only abstract sketches of the models have so far been released.

The new vehicles will join the Clarity Fuel Cell and come as Honda announces plans for electrified vehicles to make up two-thirds of its global auto sales by 2030.

Few details have been released but Honda says the Clarity Electric will be targeted at affordability while the Clarity Plug-in Hybrid will be the volume leader in the series and will bring an all-electric driving range rating in excess of 40 miles.