A hydrogen car roadshow held by Arval has shown strong fleet interest in the technology while demonstrating the benefits. 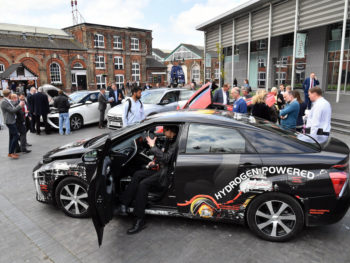 Hydrogen cars from manufacturers including Hyundai, Toyota and Riversimple were available to examine at the event

The first in a series of hydrogen car roadshows being held by the leasing firm in the UK this year, the event – held at the National Trust property Heelis in Swindon – attracted businesses, local politicians and other industry stakeholders during a morning session that explained the hydrogen transport proposition in detail.

In the afternoon, the event was opened up to the general public, hundreds of whom took an interest in the event, and hydrogen cars from manufacturers including Hyundai, Toyota and Riversimple were available to examine.

The event also drew upon Arval’s expertise in hydrogen cars through its involvement in a Swindon-based project called the Hydrogen Hub, which researches the viability of fuel cell technology for domestic, commercial and transport applications in real world conditions.

The roadshow will now visit four further locations, starting with Oxford on 17 May, Leeds on 28 June, Birmingham on 16 October and London later in the year.

Paul Marchment, senior business manager at Arval, who oversees the company’s hydrogen activities, said: “Our aim at each location is to reach audiences who together can help drive positive change. We want to show them hydrogen vehicles and explain how the technology works. Once you know more about the technology, you are more likely to adopt and champion it.

“While in its infancy – and notwithstanding that vehicle production needs to increase to cut purchase price, and that the refuelling infrastructure needs to improve – we believe that with the right backing from the public, businesses, government and manufacturers, the demand for hydrogen will increase and that will help drive a more sustainable future for all.”