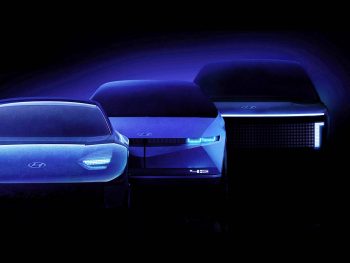 Hyundai has reinvented its IONIQ model name to be its new battery electric brand name.

The company has confirmed plans to introduce three new IONIQ EV models over the next four years, starting in early 2021 with IONIQ 5 – a mid-size fully electric C-segment SUV said to be based on the concept ’45’, which was a show car revealed at the last Frankfurt Motor Show (IAA) 2019.

In 2022, Hyundai will introduce IONIQ 6 saloon/sedan, which is based on the concept EV ‘Prophecy’ that was unveiled in March. This will then be followed in early 2024 by IONIQ 7, a large SUV.

The range of EVs will see even numbers relate to saloon models and odd numbers applied to SUVs – so we can expect with reasonable certainty that Hyundai will fill in the gaps with an IONIQ 1, 2, 3 or possibly 4, in time.

New IONIQ EV models will be based on the E-GMP (Electric-Global Modular Platform) platform, which also includes the bonus of promised large range combined with rapid charge times, with early indications suggesting around 300 mile ranges with 20 minute rapid charging. The platform also introduces unique features, such as a glove box designed as drawers and wireless connectivity.

The rebirth of IONIQ as Hyundai Motor Group’s electric brand marks a significant step forwards in its Strategy 2025, which will see the Group aim to sell one million battery electric vehicles and gain a 10% global market share by 2025. Under the Strategy, Hyundai itself aims to become the world’s third-largest automaker of eco-friendly vehicles by 2025, with 560,000 BEV sales in addition to FCEV sales.

Hyundai celebrated the brand launch by turning the London Eye into a giant letter ‘Q’ with electric lights, symbolising the rebirth of the IONIQ brand.