Hyundai has confirmed hybrid and plug-in hybrid powertrains will be added to the Santa Fe SUV. 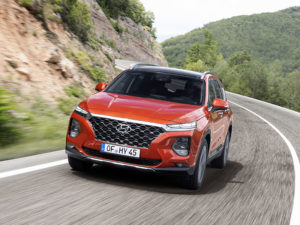 The Hyundai Santa Fe will initially be available with petrol, diesel and mild hybrid powertrains

Likely to arrive in 2020, the company confirmed their flagship SUV will receive a full array of hybrid powertrains, ranging from 48V mild hybrid, to hybrid and plug-in hybrid.

Although there is little detail to go on for the hybrid and plug-in hybrid Santa Fe models, the mild hybrid variant will be the first to market, joining a powerful 48V system to a 2.0-litre diesel that can add torque to the engine thus improving efficiency.

The mild hybrid system operates seamlessly, thanks to a setup similar to a stop and start system only with more power and a larger battery. It does not, however, offer any electric-only range and instead can only support the combustion engine. When decelerating, the motor becomes a generator and recuperates energy that would otherwise be lost, topping up the battery.

By contrast, both the hybrid and plug-in hybrid Santa Fe will likely run petrol engines – possibly similar to those found in the Ioniq, but likely with more power. These may also be matched to the company’s new eight-speed automatic gearbox, rather than the seven-speed DCT (dual clutch transmission) found in Hyundai’s existing hybrid line-up.