Hyundai has revealed its Nexo fuel cell electric vehicle, which will provide a successor to the ix35 with increased power, range and performance when it goes on sale in select global markets from early this year. 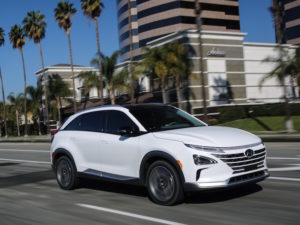 The Nexo fuel cell SUV has an estimated range of 500 miles compared with the ix35 Fuel Cell’s 369 miles.

Unveiled at the Consumer Electronics Show (CES) in Las Vegas, the Nexo SUV is built on all-new platform designed for fuel cell power and is longer, wider but lower than the ix35.

The Nexo will also provide a platform to debut Hyundai’s forthcoming autonomous technologies as it’s able to provide a stable electric power supply without concerns about driving range.

Onboard technologies include a Blind-spot View Monitor system that shows drivers rear and side views from both sides of the vehicle using cameras, helping to eliminate blind spots while changing lanes in either direction.

Other technologies include Lane Following Assist, which can keep the steering on the Nexo centred at speeds between 0-90mph on both highways and city streets and can be used with Hyundai’s Highway Driving Assist, which adjusts speed in line with prevailing limits.

The Nexo also introduces a Remote Smart Parking Assist that can enter or exit a parking space without the driver needing to be on board.